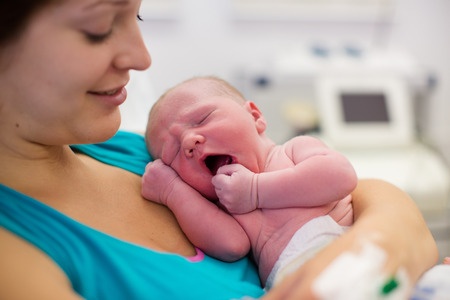 If you’ve scrolled through Instagram lately, you may have encountered photos of newborn babies attached to their mothers’ placenta – a trend known as “lotus birth.” While this practice isn’t exactly new, its popularity is spreading among new moms through Instagram and other social media services. However, as with any trend, it’s important to know whether or not it’s safe for you and your baby.
What exactly is a lotus birth?
According to CafeMom, it means that instead of allowing the baby’s umbilical cord to be cut and the placenta removed after giving birth, the umbilical cord is left to decompose naturally, until it falls off the baby’s belly.
While numerous social media posts claim that lotus births promote mother-child bonding, there is no scientific evidence to support this claim. In fact, most doctors discourage it, because of the risk of infection. In 2008, the United Kingdom’s Royal College of Obstetrics and Gynecologists issued a statementthat claimed that not only is the practice of no benefit to the baby, but “if left for a period of time after birth, there is a risk of infection which can consequently spread to the baby.” The statement went on to remind parents that the placenta has no circulation after birth, and is essentially “dead tissue.”
Do you have questions about how to stay healthy throughout your pregnancy and birth? Call Maternal Resources at 201-487-8600 if you are in the New Jersey/NYC area, so we can connect you with the best resources you need to protect yourself and your baby.
Previous X Next